Passive regeneration refers to the process of cleaning a diesel particulate filter using the heat of the exhaust gas alone. Diesel particulate matter will spontaneously combust when the temperature exceeds about 550 0C, but in most cases the exhaust gas of a diesel engine will never get that hot. Fortunately, using catalytic technology, the combustion temperature can be reduced substantially, and this facilitates passive regeneration within the range of exhaust gas temperatures which occur regularly in many engines.

The temperature of the exhaust gas of a diesel engine varies according to the load placed on the engine. To illustrate the point, here is a graph showing how the exhaust gas temperature varies with load on typical engines used in the marine and power generation sectors: 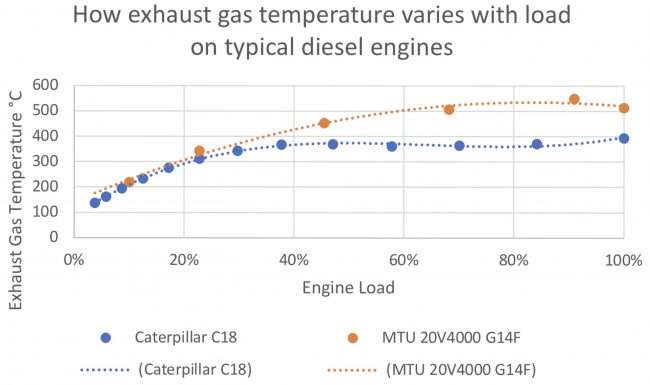 In order to work out whether a specific application is suitable for a passive DPF, the first question is whether the engine load follows a predictable pattern. In some applications, such as a ferry on a fixed route, a graph showing engine load against time will be very similar from one day to the next, whereas in the case of a standby generator there may be no pattern at all. If there is a predictable pattern, the next step is to install a datalogger and log the temperature over a period of typical use. The data obtained from this exercise will enable an expert to predict whether passive regeneration is a viable option, and if so, which version.

As mentioned above, catalytic technology is used to make passive regeneration practical. There are four options as to how this technology is deployed, as follows:

The advantages and disadvantages of these approaches are summarised here